Twitter Ends Support for Its Desktop Client on Mac 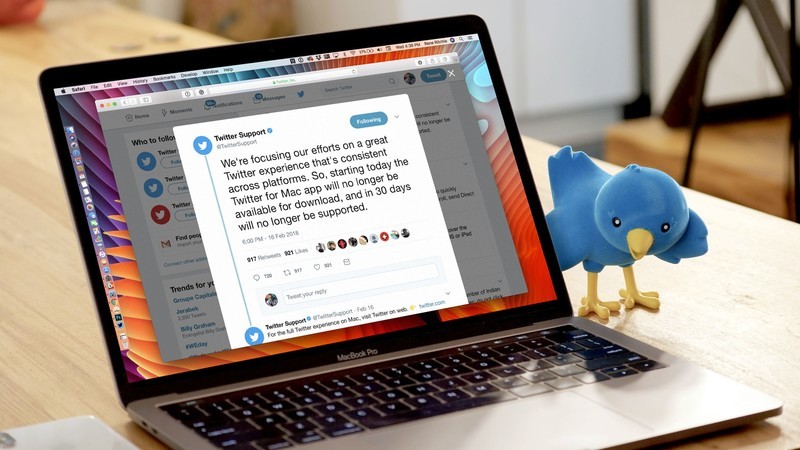 On last Friday Twitter announced that its Twitter for Mac desktop app was no longer be available for download, and that the app would no longer be supported in 30 days. The company whereafter suggests its users to access the service via the web, to ‘enable a consistent, full experience experience across platforms’. Here’s how it says:

“We’re focusing our efforts on a great Twitter experience that’s consistent across platforms. So, starting today the Twitter for Mac app will no longer be available for download, and in 30 days will no longer be supported.

The death of the Twitter app for Mac may bring troubles to those Mac users who are currently using it to access the social network. But if you prefer to use Twitter within an app rather than from a browser, you still have several options in Mac App Store.

Twitter’s official app for Mac does not lack third party alternatives. As a originally independent social media dashboard app used for managing Twitter accounts, TweetDeck was acquired by Twitter back in 2011 and then integrated into Twitter’s interface. However, TweetDeck for Windows desktop app has ceased functioning in 2016. TweetDeck is still available for free on Mac App Store, though it has not been updated since July 2015, and even Twitter does not recommend it as an alternative.

By far, Tweetbot and Twitterrific are two popular Twitter clients. Tweetbot prices $9.99 in the Mac App Store, providing most features that you can expect from a solid Twitter client. If you have been using the iOS version of this app, you can have a consistent experience when using the Mac version. Also, Twitterrific is available to download on Mac Store App and currently on sale $7.99 (normally priced at $19.99). It supports multiple accounts , timeline syncing and many customization options.

Though the third party apps can cover most features of Twitter, there are still some functions that app developers are not allowed to access to Twitter’s API (like polls). The shut down of Twitter for Mac desktop app may be a sad closing note, but we might still have expectations if Apple manages to run iOS apps on macOS platform.