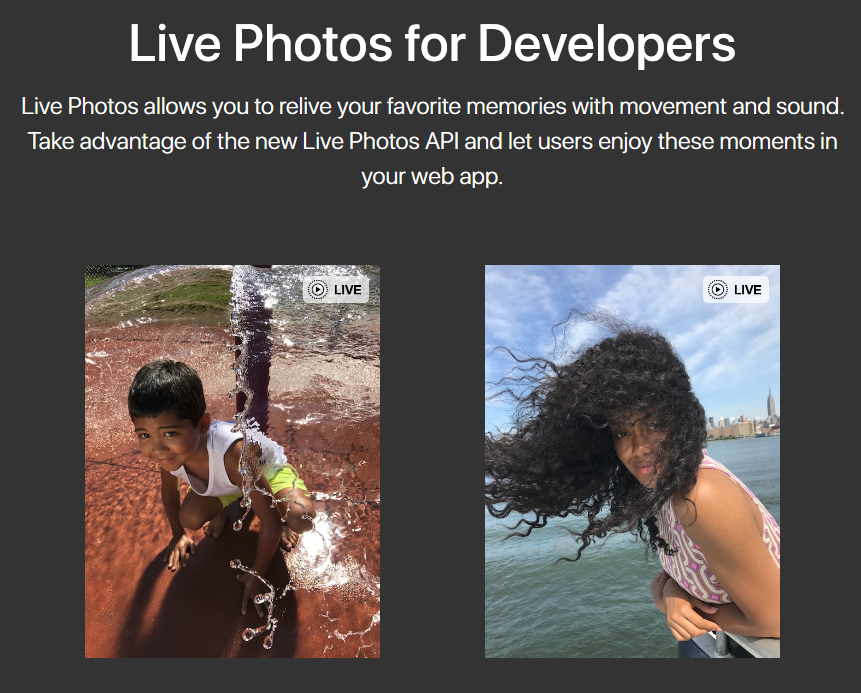 Apple recently released a JavaScript-based API for Live Photos that makes it easier for developers to post Live Photos to the web or to add Live Photos support in an app.

When the company released iPhone 6s in 2015, it introduced a new feature called Live Photos in iOS 9, which allows users to capture their favorite moments with movement and sound in animated pictures. A Live Photo records what happens 1.5 seconds before and after you tap the shutter button in Camera app, and afterwards you can press and hold the screen to see how it becomes a video clip.

It is a funny feature that wins many users’ favor. However, after nearly two years, the number of apps that support Live Photos is still limited. As for the Web, some social networks, like Facebook and Tumblr, have found the way to support Live Photos on their websites, while many other platforms might have not figured out the way yet.

Now Apple unveiled the API for its Live Photos feature to help bring Live Photo to the Web and more apps. Third-party developers are encouraged to take advantage of the new Live Photos API to build their apps and websites that can display Live Photos and to let photos enthusiasts enjoy their live moments in their apps or websites.

“The JavaScript API presents the player in the form of a DOM element, much like an image or video tag, which can be configured with photo and video resources and other options, and have its playback controlled either programmatically by the consuming developer, or via pre-provided controls by the browsing end-user.”

The kit is compatible with Safari, Chrome, and Firefox on macOS and also with Chrome, Firefox, Edge and Internet Explorer 11 running on Windows. Web developers need to embed the LivePhotosKit JS in the webpage and enable JavaScript strict mode. Live Photos can be passed to the browser as a .JPG file and a .MOV file.

To get more details on the LivePhotosKit API, see the Apple page here.